Years ago, when she worked in an acute care hospital, Jodi Butts watched in admiration as a psychiatrist on staff not only took detailed hand-written notes while listening to his patients, but read back those notes to get their suggested revisions and additional input.

“I used to hold the privacy officer role at that hospital and would receive all the requests for corrections to patient records. Needless to say, that psychiatrist never received those requests,” Butts, who is now Chief Executive Officer at Rise Asset Development, recalled in a recent SAS webinar on how to transform mental health outcomes through analytics. “Even though he did that first draft, because there was that accessibility to what was in the record, there was ownership of the data and a common understanding of what was an accurate reflection of their conversation.”

Butts’ organization offers low-interest small business loans, mentorship and other services to people with a history of mental health and addiction challenges. She believes that the same spirit of collaboration and information-sharing she witnessed earlier in her career is key to using analytics to address some of the biggest problems in treating mental health across Canada. These include a $1.5 billion funding gap in spending (mental health receives 7% of health-care dollars), but also the stigma that often prevents mental health illnesses from being identified and reported. Isolation only makes things worse.

“One of my favourite pieces of gallows humour is that mental health is not a ‘casserole dish’ disease -- no one shows up on your door with a casserole when you’re mentally ill,” she said. Whereas the care for other illnesses may be episodic or organized around a particular crisis, she added, mental health issues are more chronic in nature.

According to Greg Horne, SAS Canada’s National Lead For Health Care, the first step in applying analytics to help is getting past an inertia that stems from not knowing where to begin.

“The sheer number of sources of data that can be used and applied to the patient is always growing, and we fall into the danger of, ‘How do we get the relevant data and avoid information overload?’” he said. “We need to start with some outcomes -- what does success look like to a real patient?”

Rather than using analytics to merely capture and report what has been done, for example -- such as how recently a patient interacted with a clinician -- Horne outlined a decision-making spectrum that focused on predicting what might happen. This could start early, and at a community level, by evaluating posts on social media that indicate individuals suffering from bullying or grappling with suicidal thoughts. 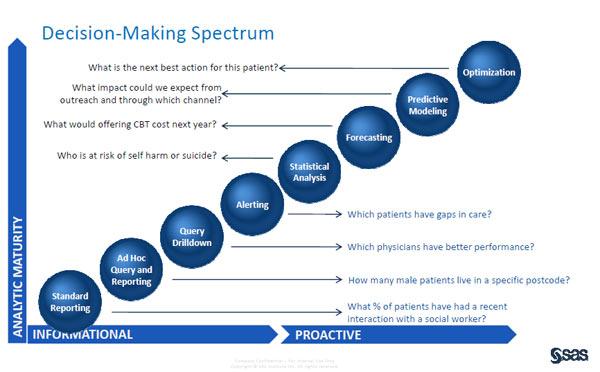 “The analysis of self-reported health data on social media is very valuable to policymakers and for targeted outreach...”

“The analysis of self-reported health data on social media is very valuable to policymakers and for targeted outreach,” he said, pointing to a recent spate of suicides at the University of Guelph. “In that case, was there a possibility of seeing those signals earlier?”

Butts agreed. “There’s a lot of space between the doctor’s office and those broad public health campaigns that can nudge people towards positive behaviours and self-identification of challenges and making good choices in seeking help.”

Patients tend to take several common routes once a mental health issue arises, Horne said. Some self-medicate through over-the-counter drugs, while others take  pharmaceuticals prescribed by their doctor. Still others experiment with apps and other digital tools. This can be very ad-hoc, Horne went on, whereas analytics can be used to create a risk score that assesses what is most likely to be successful and personalize their treatment.

Analytics can also get in front of “care gaps” such as areas where public health insurance won’t cover treatment costs, or other hurdles between a patient presenting to a primary care physician and getting treated.

“Patients are not only getting in through emergency departments, but also through the criminal justice system,” Horne said, citing the case of a woman who leapt on a police cruiser and only received treatment after being arrested and put in front of a judge. “That is not how we should be treating patients in a health-care situation.”

Finally, Horne said analytics should be used to measure treatment outcomes and support processes that demonstrate evidence-based approaches to mental health care. The metrics can also support organizations such as Rise Asset Development, which sustains and rewards those receiving treatment.

“The good news -- if you can have good news about a funding gap -- is that we have a real opportunity to design a system that doesn’t necessarily look exactly like the acute care system,” Butts said.

Director of Methodologies and Specialized Care, Canadian Institute For Health Information, and is available on-demand. 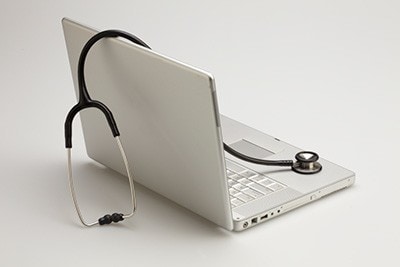