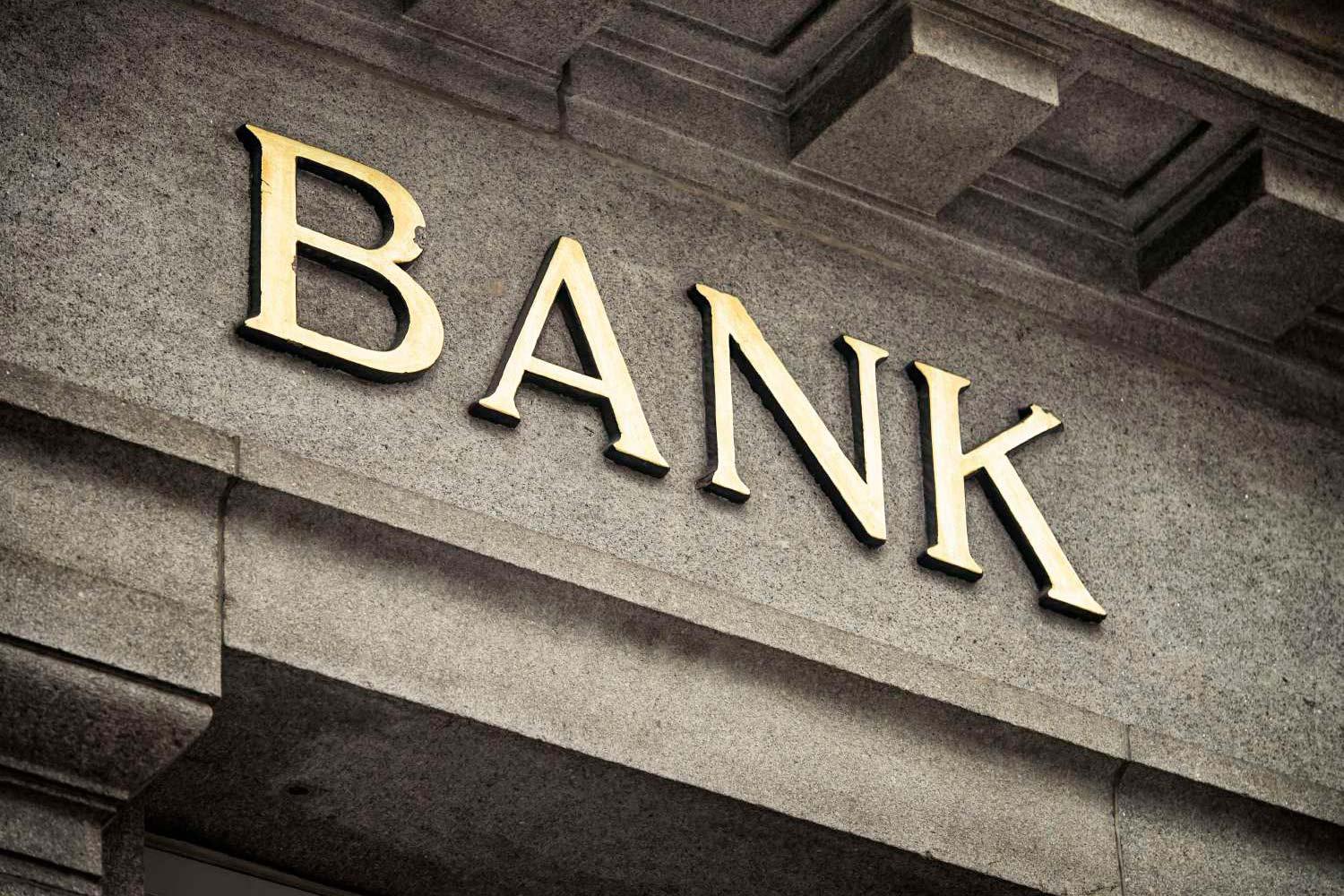 The survey responses of more than 300 executives across industries focused on artificial intelligence (AI) at large companies around the world reveal growing evidence that we are on the verge of a momentum shift – across virtually all industries.

The survey, by Forbes Insights and conducted by SAS, Accenture Applied Intelligence and Intel shows signs that we’ve reached the moment at which AI expands beyond discrete use cases and experiments into enterprise-wide adoption. The responses submitted by many of the executives we surveyed point to an explosion of AI adoption just around the corner, even as gaps in capabilities and strategy are revealed.

Our survey findings reveal that leaders and early adopters in AI are making important advances and are identifying and expanding on what works as they use AI in more ways and more parts of their organizations.

What does this mean for banks?

It is widely acknowledged by industry observers that banks have been operating at the front lines of AI. Even bank customers who have engaged with digital assistants and a growing number of AI-enabled service technologies can see the impact of AI in banking.  “Whether in retail, corporate, or investment banking, the fact is that the industry has enthusiastically dived into the AI pool and is now happily splashing around,” said Alex Kwiatkowski, senior industry consultant for the SAS global banking practice. “But this isn’t about playing around with new tools – it is a moment of focused exploration, which is helping the industry identify both the opportunities and potential pitfalls.”

While customer-facing AI applications may present the most obvious and easily understood examples of AI at work in the banking industry, its impact is felt well beyond the front office. Within banks, AI is being deployed virtually anywhere it can play a role today, from the front office to the middle and back offices as well, helping with anti-money-laundering initiatives and anti-terror operations to more traditional back-office activities such as corporate finance and accounting tasks (see Figure 1). 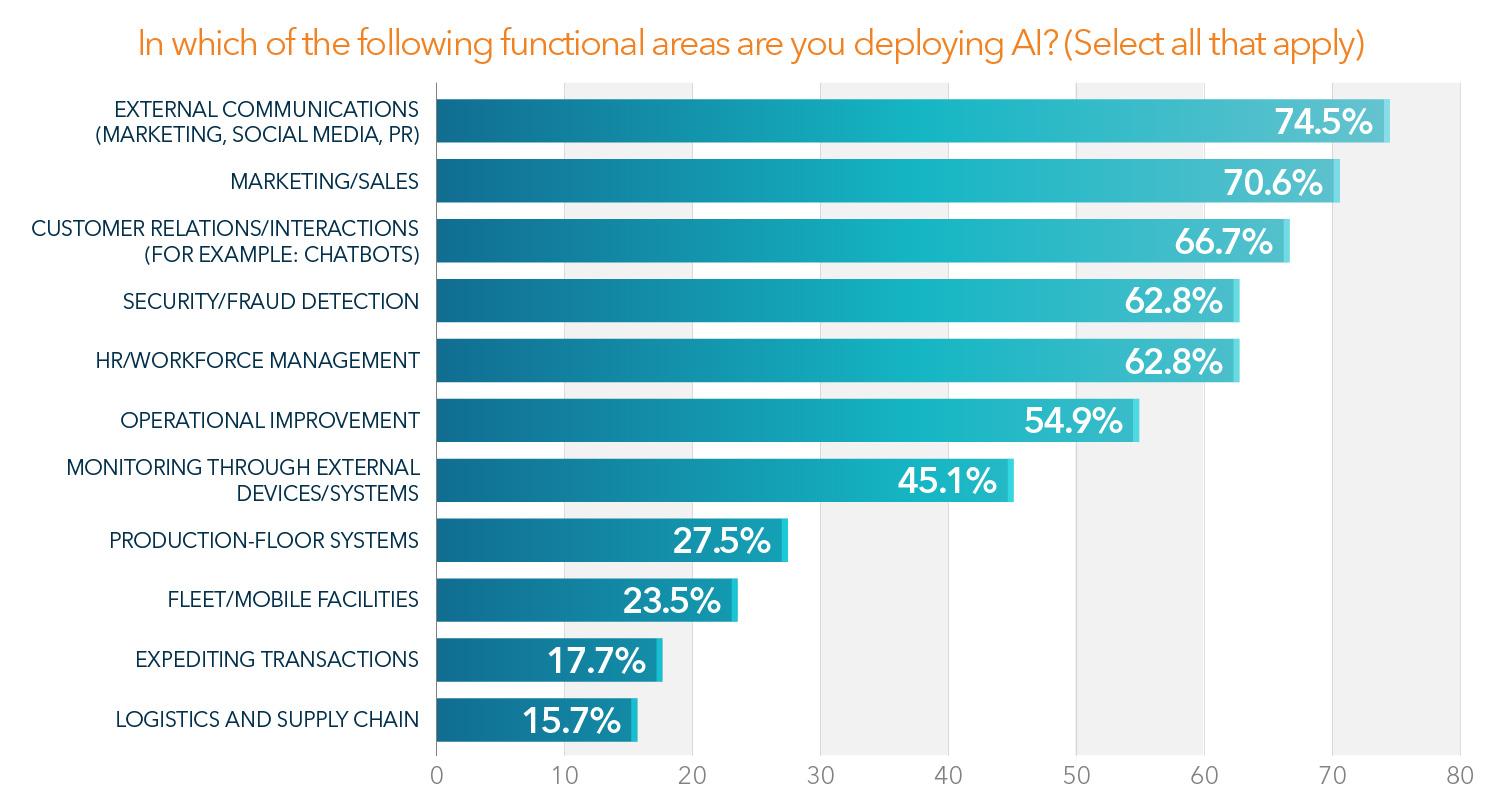 One key reason for this active, often aggressive application of AI capabilities: When it comes to creating value, AI is working. “Banks are rightly obsessed with their ‘jaws’ ratios – where the upper jaw is revenue, hopefully growing higher, and the lower jaw is cost, which should be steadily moving lower,” Kwiatkowski said. “There’s a growing understanding that AI isn’t just about lowering costs, but has an equally important role to play in successfully doing all the things that help you improve revenue, such as improving relationships with clients, making new contributions to innovation efforts, and more. That’s a big reason we believe what’s going on in banking has lessons that are more broadly applicable to those in other industries.”

So what do banking executives report about their experiences with AI? Where are they focusing today? What’s working? What are their plans for the future? Let’s focus on a few of the highlights of our findings specifically from the financial services industry, combined with our own insights based on recent experience in the industry.

There’s a growing understanding that AI isn’t just about lowering costs, but has an equally important role to play in successfully doing all the things that help you improve revenue, such as improving relationships with clients, making new contributions to innovation efforts, and more.

Banks are still in the experimentation phase with AI

TYes, banks are at the forefront of AI usage today, but that doesn’t mean they have settled into a comfortable, mature phase of AI yet.  “We’re still squarely in the ‘seeing what sticks’ phase in banking,” Kwiatkowski said, “which means that we’re seeing a strong appetite to use AI virtually anywhere it can conceivably play a role, testing it out, then advancing based on what’s learned.” Given the rise of fintech, this may be interpreted as a defensive measure – an attempt by more traditional banks to stay a step ahead of disruptive innovations bubbling up from the fintech world.

This experimental approach is reflected in the survey results, which show a dizzying range of AI technologies being used by financial services firms, in an equally diverse range of business activities (see Figure 2). 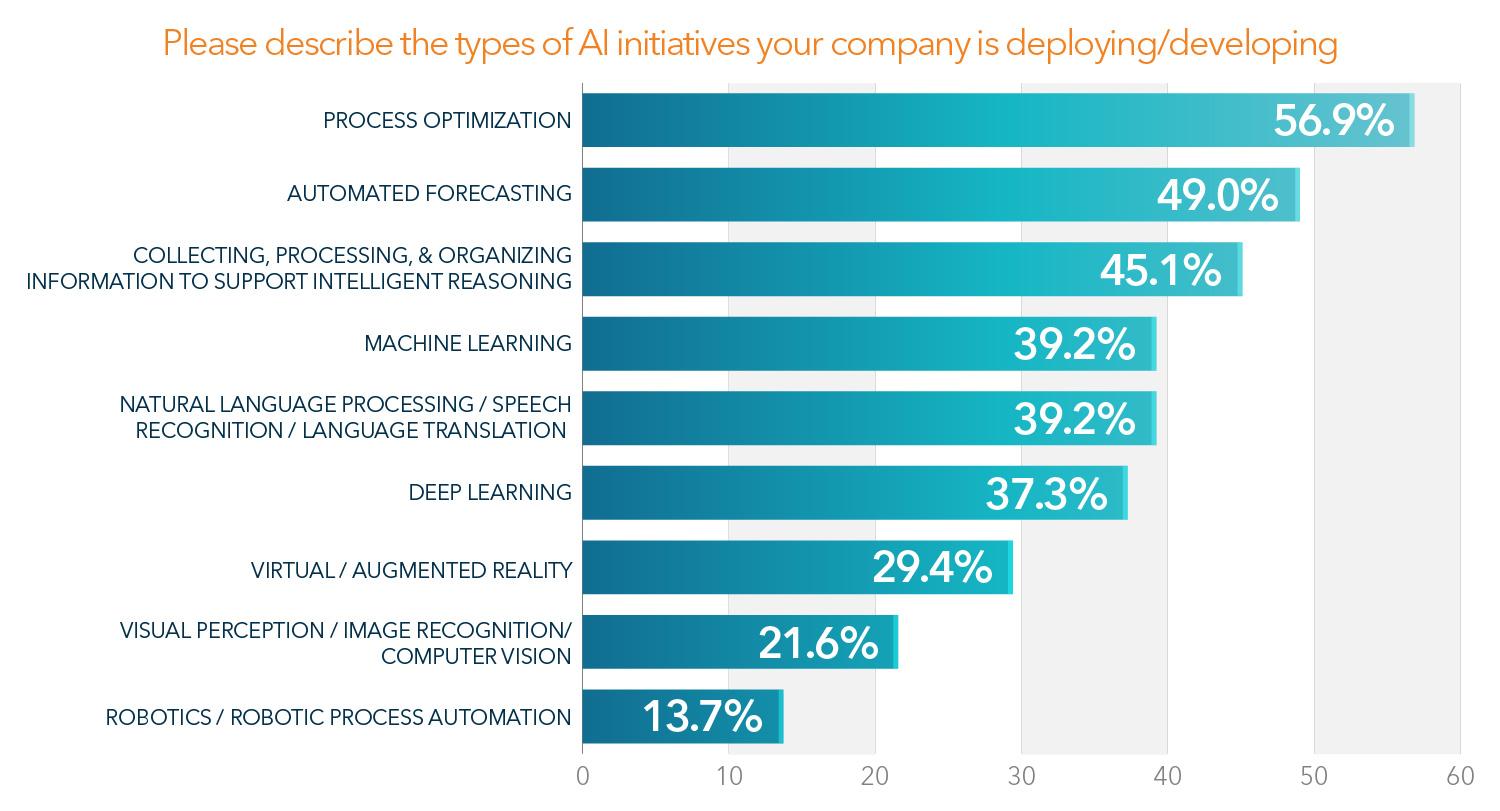 AI oversight is viewed as essential – and banks are acting accordingly

As you would expect in such a heavily regulated industry, financial services leaders report growing levels of oversight for their AI initiatives. This is no time for banking leaders to get comfortable, given the already high (and rising) importance of using banking data responsibly. Plus, as AI capabilities are constantly advancing, as are the ways they are being put to work in banks. This will require constant vigilance and oversight is required in order to keep up.

“We work with a major global bank that is beginning to use digital assistants with their high net worth clients,” Kwiatkowski said. “Everyone involved in that initiative understands that there needs to be a lot of oversight, and that’s how they’re moving ahead.”

Who conducts reviews or evaluations of AI outputs? The most common answer from financial services respondents is digital initiatives boards and committees (see Figure 3).

Beyond oversight and compliance, ethics is an issue getting more attention every day. “If I had a nickel for every time I was asked about the negative end state of AI, I would be rich today,” Melvin Greer, Chief Data Scientist - Americas at Intel Corporation said. “But many of those asking me about AI are unaware that those technologies are already shaping their lives in ways that are all but invisible every day. AI has a real impact on our lives already, highlighting the importance of having a strong ethical framework surrounding its use.”

Ethics is a key aspect of oversight that banks should be actively considering as they move ahead. 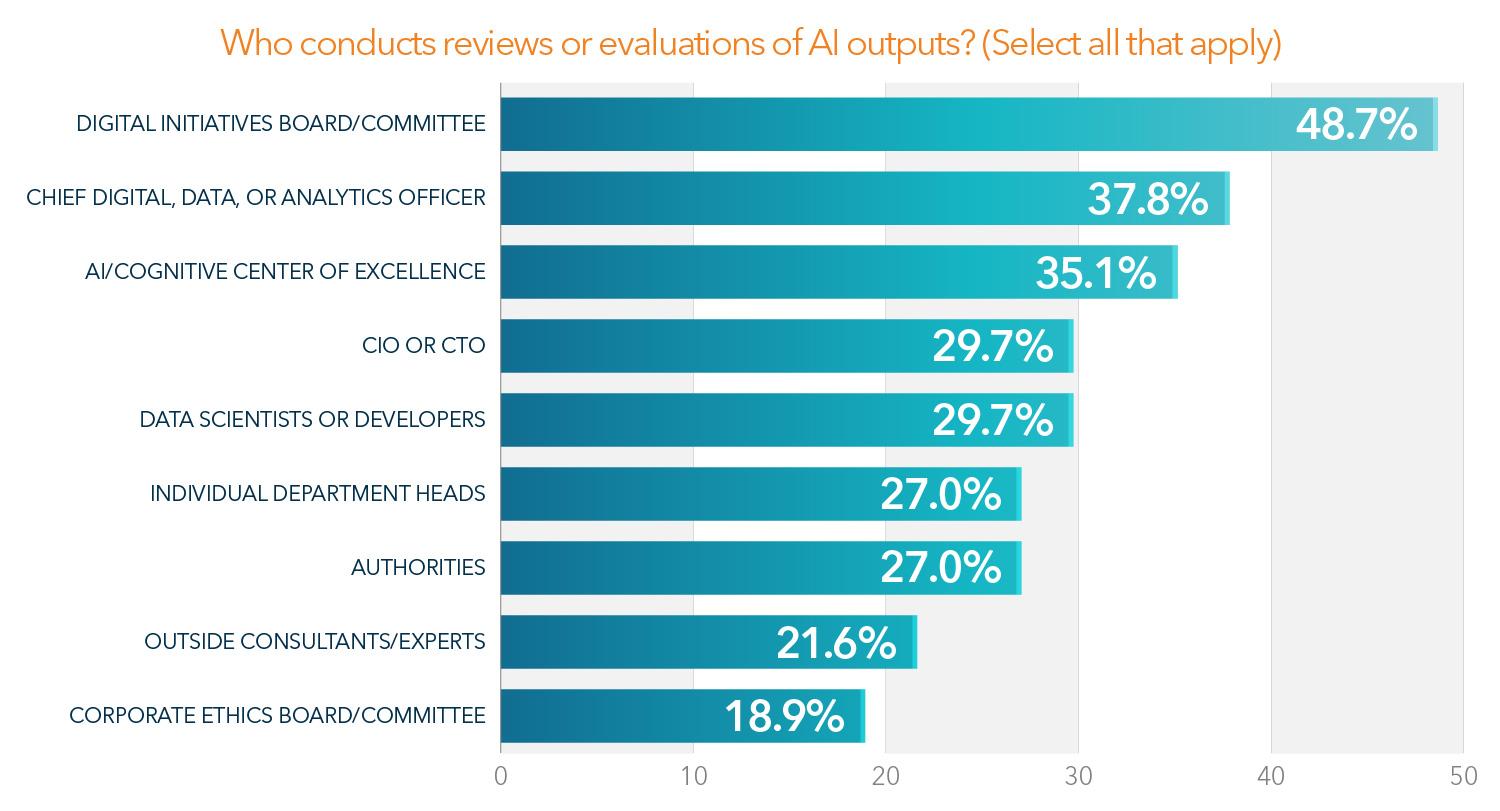 Seeking the right balance between AI and human insight and involvement

While the popular imagination is captured by the idea that AI advances will claim human jobs, in banking the reality is different.  According to Alex Kwiatkowski, “Banks have done a good job of avoiding the mentality of ‘the machine has got this now, so we can go do something else’ – an important distinction that leaders in other industries should heed. People are still playing a huge role, just as they did after the advent of the ATM.”

Perhaps this is because banking leaders understand that AI systems are not infallible, as reflected in their survey responses (see Figure 4). 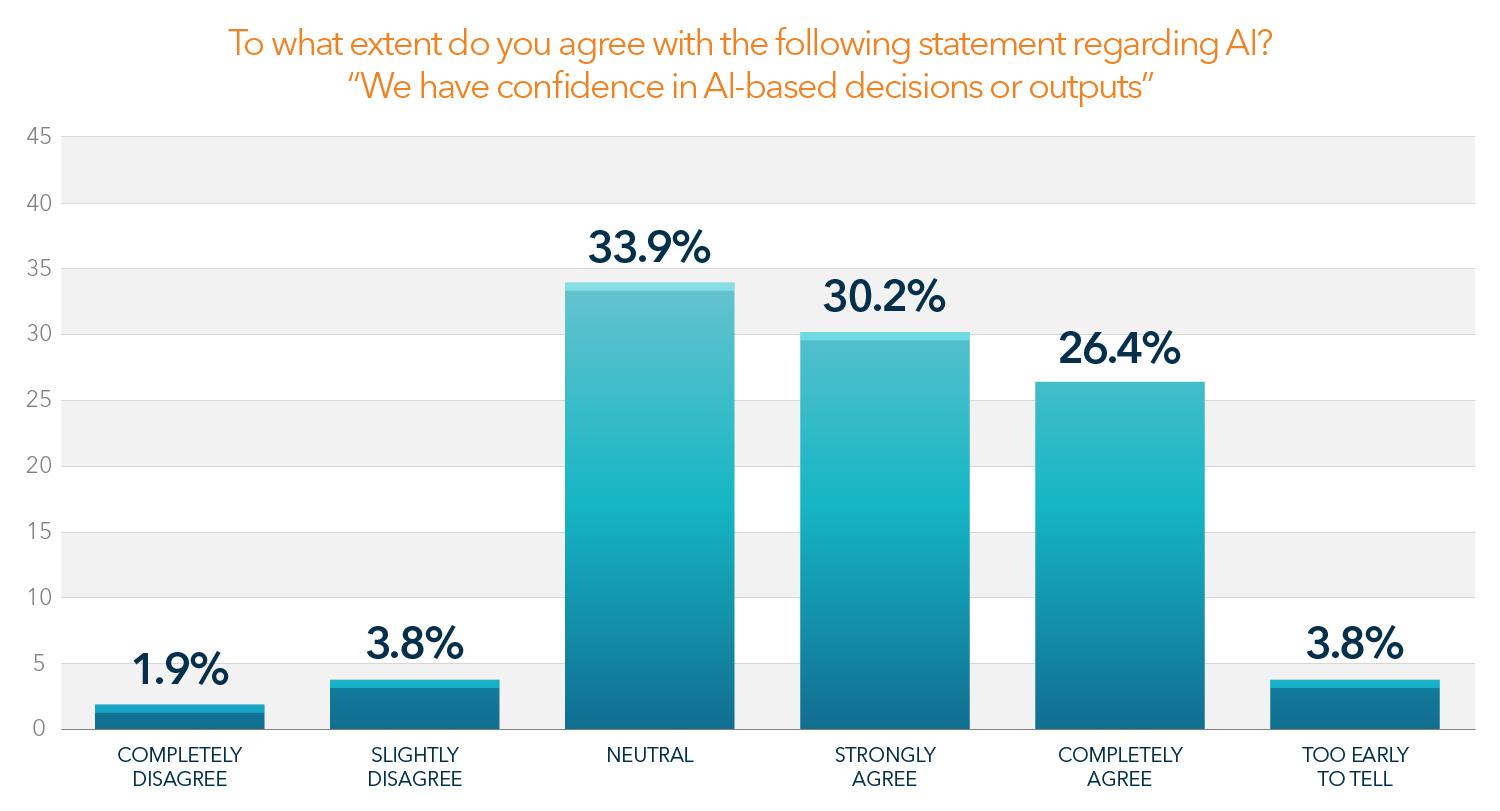 Banking leaders understand that AI is likely to have an impact on jobs and roles, but perhaps not the type of negative impact that their employees are bracing for. “We believe AI will transform the relationship between people and technology,” Athina Kanioura, Chief Data Scientist for Accenture Applied Intelligence said. “The real excitement lies with new jobs on the horizon, such as ‘explainers’ who will be responsible for making AI explainable, or ‘trainers’ who will have responsibility for directing the development of AI systems so that they perform at a higher level.” Financial services executives report relatively high levels of concern about the perceived impact of AI on employee relations (see Figure 5). 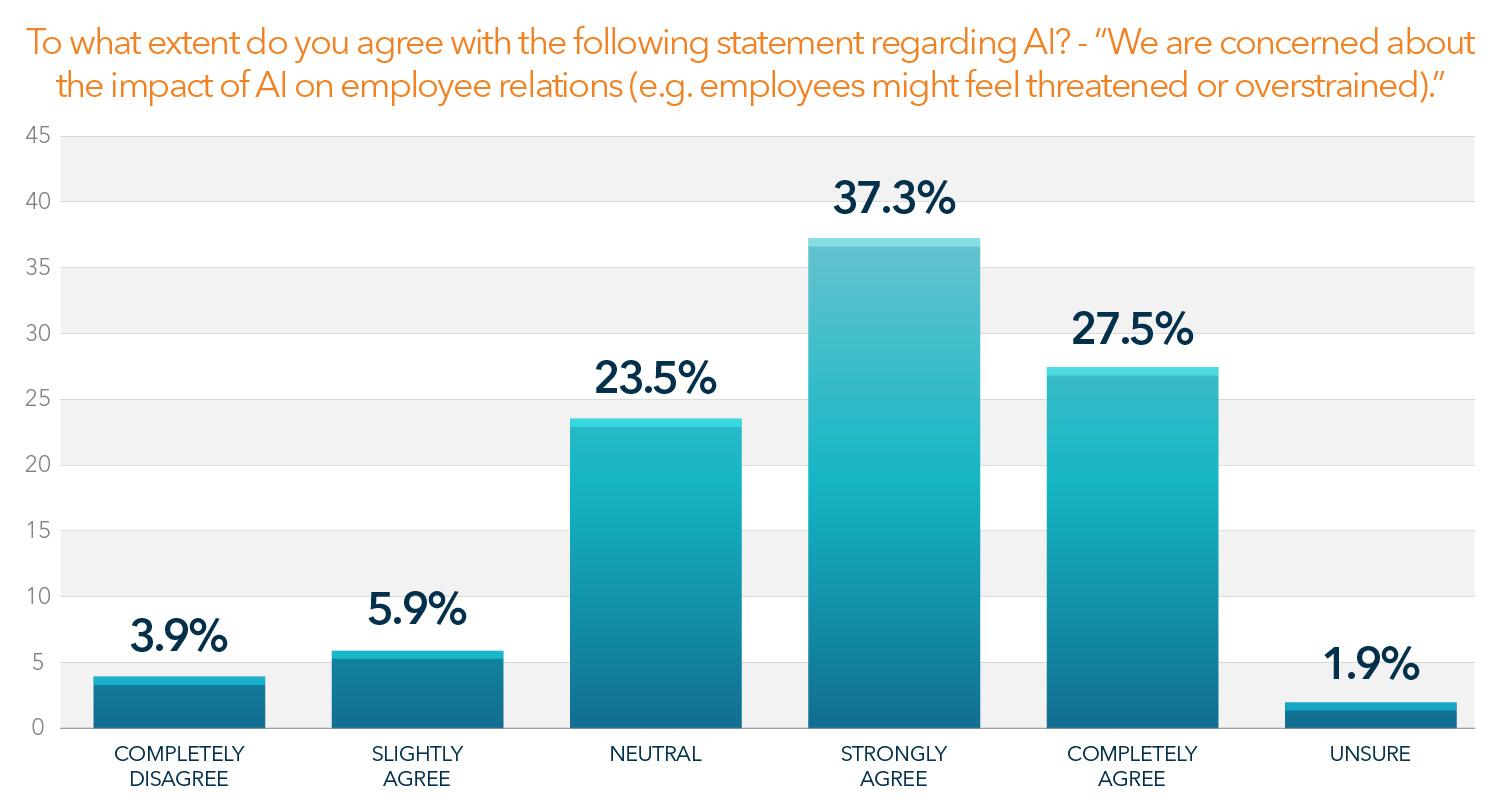 Figure 5: Impact of AI on employees

What’s next with AI in banking?

It seems clear that AI will continue to expand within banks, as leaders become more adept at deploying these capabilities, and as the capabilities themselves become even more powerful.  While what’s next will vary from bank to bank based on their operating environment, it’s a safe bet that the factors that set successful AI adopters apart uncovered in the research will figure prominently among banks include:

Regardless of how you interpret individual findings in the survey), it’s clear that AI deployment is accelerating – and only just getting started. If AI were a five-stage rocket, we may be firing the third stage now.  And as AI continues its ascent, many of the issues examined in this survey will grow in importance, entering more boardroom-level conversations, landing on more implementation-level meeting agendas and appearing more frequently in business and popular media.