Get started with IoT

The Internet of Things (IoT) refers to a vast number of “things” that are connected to the internet so they can share data with other things – IoT applications, connected devices, industrial machines and more. Internet-connected devices use built-in sensors to collect data and, in some cases, act on it. IoT connected devices and machines can improve how we work and live. Real-world Internet of Things examples range from a smart home that automatically adjusts heating and lighting to a smart factory that monitors industrial machines to look for problems, then automatically adjusts to avoid failures.

History of the Internet of Things

The term “Internet of Things” was coined by entrepreneur Kevin Ashton, one of the founders of the Auto-ID Center at MIT. Ashton was part of a team that discovered how to link objects to the internet through an RFID tag. He first used the phrase “Internet of Things” in a 1999 presentation – and it has stuck around ever since.

Ashton may have been first to use the term Internet of Things, but the concept of connected devices – particularly connected machines – has been around for a long time. For example, machines have been communicating with each other since the first electric telegraphs were developed in the late 1830s. Other technologies that fed into IoT were radio voice transmissions, wireless (Wi-Fi) technologies and supervisory control and data acquisition (SCADA) software. Then in 1982, a modified Coke machine at Carnegie Mellon University became the first connected smart appliance. Using the university’s local ethernet or ARPANET – a precursor to today’s internet – students could find out which drinks were stocked, and whether they were cold.

Reducing Downtime So Truckers Can Keep on Trucking

By collecting streaming IoT data in real time from thousands of sensors on each vehicle, Volvo Trucks can monitor fault codes to know when anything is amiss with a major system, like the engine or transmission.

The Internet of Things in Today’s World

The Internet of Things has had significant effects on our world. Learn how IoT is affecting our lives today, as the volume and variety of big data streaming from IoT expands and analytics technologies evolve.

Learn what all those techy words and acronyms mean in this go-to resource that defines 101 IoT terms.

Read how event stream processing technology identifies patterns in data streams as events happen – so you can use real-time, streaming data from IoT to make fact-based, automated decisions.

SAS is considered a best-of-breed champion for streaming analytics in this Bloor Market Update (October 2018).

Many industries use IoT to understand consumer needs in real time, become more responsive, improve machine and system quality on the fly, streamline operations and discover innovative ways to operate as part of their digital transformation efforts.

IoT unites data, analytics and marketing processes across locations. Retailers capture IoT data from in-store and digital channels and apply analytics (including artificial intelligence, or AI) for real-time, contextual listening and to understand behavior patterns and preferences. They often use IoT connected devices like RFID inventory tracking chips, cellular and Wi-Fi systems, beacons and smart shelves in their Internet of Things strategy.

IoT connects all phases of the Industrial Internet of Things (IIoT) process – from supply chain to delivery – for a cohesive view of production, process and product data. Advanced IoT sensors in factory machines or warehouse shelves, along with big data analytics and predictive modeling, can prevent defects and downtime, maximize equipment performance, cut warranty costs, boost production yield and enhance the customer experience.

IoT technology captures data streaming in real time from the Internet of Medical Things (IoMT) – such as wearables and other medical connected devices that monitor exercise, sleep and other health habits. This IoT data enables precise diagnoses and treatment plans, improves patient safety and outcomes, and streamlines care delivery.

IoT with geofence-enabled location intelligence and AI, deployed across the value chain, can deliver greater efficiency and reliability for transportation and logistics companies. This technology can improve service quality, reduce downtime and boost customer satisfaction. It can also enhance safety and reduce costs by managing, tracking and monitoring connected vehicles, freight and other mobile assets in real time.

The Internet of Things helps providers deliver reliable, fair-priced services and products. IoT connected devices and machines predict problems before they occur. Distributed grid resources like solar and wind are integrated through IoT. And behavior data – such as that collected from smart homes – improves convenience and security, and informs development of customized services.

With the Internet of Things (IoT), we can understand the context (the time and place of the customer) to identify when we’re certain the customer needs help or an incentive to purchase, and we can respond proactively. Dan Mitchell Business Director for the Global Retail and CPG Industry Practice SAS

How the Internet of Things Works

Being connected through the Internet of Things – to send, receive and often act on data – results in many smart IoT things that we can use to build a more secure, convenient, productive and intelligent world.
Already, Internet of Things capabilities play a significant role in businesses’ digital transformation efforts. When we combine IoT data with advanced analytics and AI – leading to the “Artificial Intelligence of Things” – the possibilities seem endless. Learn the basic terms that define the Internet of Things and see how IoT works in the real world.

Since 2012, major changes in sensors have led to rapid maturing in the Internet of Things market – fueling digital transformation for many businesses:

How IoT Works With Key Technologies

Big data analytics. IoT is a major contributor to big data – the massive volume, velocity and variety of structured and unstructured data businesses collect every day. Getting value from big data in IoT requires big data analytics. Related techniques include predictive analytics, text mining, cloud computing, data mining, data lakes and Hadoop. Most organizations use a combination of these techniques to get the most value possible from IoT.

Dig deeper as you get started with the Internet of Things – from setting strategy to measuring IoT success. 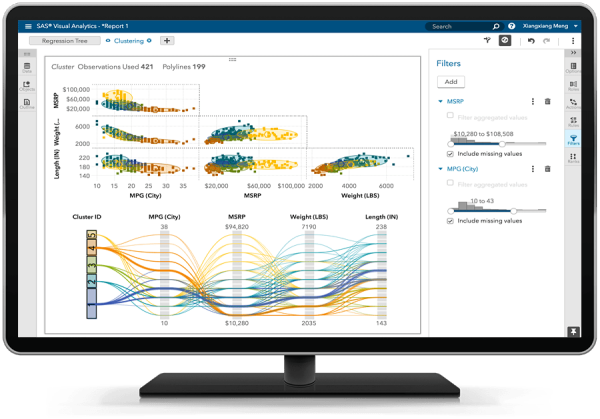 Experience the power of SAS software yourself.

See SAS software in action with a free demo.

Get pricing based on your company's needs.

Let us know how we can help you.