The statistical analysis is just as important as watching the players on the ice. Our hockey know-how must be able to work in combination with the statistics in order to arrive at the best decisions.

2016 will mark the start of the World Cup of Hockey for the eighth consecutive year. Eight teams from the U.S., Canada and Europe will send their best NHL players to compete, and Sweden is one of these teams. Rikard Grönborg, the coach for the men’s national ice hockey team, is in charge of selecting the players.

“Selecting the players is a long process. Trainers and staff have a good idea of the players’ soft values – we know the players well and often we have even worked with them previously,” says Grönborg.

The staff watches the players for a whole season, which gives them a good understanding of the players, their personalities, and the way they interact with the rest of the team. The greatest challenge is to not base the selection on personal opinion alone, but also to take objective values into account.

“We are specialists in hockey, not statistics. It’s important that our decisions are based on facts in order to increase our chances for success. That’s why we have help from SAS Institute,” says Grönborg.

In order to factor objective values into the selection process, SAS has analyzed and evaluated player information from NHL.com. The data are based on 1,230 regular season matches that include one million substitutions and 400,000 events. Things like penalties and goal attempts count as events.

After gathering the data, the information is modeled in a way that allows for calculations, which are then analyzed from both a detailed and an overarching level.

The strength of the statistical analysis lies in the visualization, which makes it easier to compare players and show which players stand out from the average.

It’s important to continuously measure, evaluate and reconsider, and to achieve the best results you have to analyze

“The most important thing is to present the analysis in an easy-to-explain way, to really be able to add value for the decision makers. We have used a number of diagrams and other visualization methods,” says Jon Blomqvist, data scientist at SAS Institute.

During the data analysis phase of the project Blomqvist was in close contact with Grönborg in order to present a number of different analyses. He also participated in the management meeting when the players for Team Sweden were selected, in order to explain the statistics and show the differences between different players.

The statistics were used mainly strategically, which is to say to not only to describe how the players have performed in previous matches, but how to maximize the team resources over time. The goal is to be able to optimize the resources that are available and use them at the right time and in the best part of the match

Statistical analysis just as important as the trainers’ opinions

The analysis of data from NHL.com brought objective values to the selection process in order to obtain an optimal result for creating the team.

“The analysis takes the emotion out of the decision and shows in black and white how the players perform on the ice. Often, the analysis has confirmed our gut feeling, but it has also brought surprising insights,” says Grönborg.

“It’s important to continuously measure, evaluate and reconsider, and to achieve the best results you have to analyze. Analysis is a process and a mindset, not a one-time experiment. In combination with the hockey experts’ experience, we can create a maximum value,” says Jon Blomqvist, data scientist at SAS Institute. 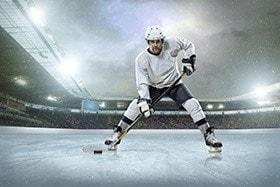