When Cameron Jagoe went back to school for his Masters of Science in Operations Management and Data Analytics at the University of Alabama in 2015, he knew exactly what kind of job he was looking for. He wanted to use machine learning to solve problems and do research, either for a company or as a consultant.

With data analysts in high demand, Jagoe was already getting nibbles from potential employers, even though he isn’t due to graduate until May of 2017. The challenge was that his previous experience was in sourcing.

“People would approach me for sourcing or supply chain positions, but that didn’t line up with what I wanted to do,” Jagoe explains.

When a bank, familiar with the data analytics program at the University of Alabama, approached him with the type of machine learning research position that did pique his interest, he was ultimately turned down. “The problem was my lack of banking experience,” says Jagoe.

This opportunity put me on a career track I’d wanted for several years.

A profitable partnership with SAS

Luckily, the University of Alabama has a strong partnership with SAS. Notes Jagoe, “Four of the first classes I took were SAS-based. And the school continually promotes SAS conferences. My professor, Dr. Denise McManus of the University’s Culverhouse College of Commerce encouraged me to submit a proposal to present at SAS Global Forum. I also applied for a SAS student scholarship and to be a SAS Ambassador.”

The proposal Jagoe submitted expanded on a project he had completed several years earlier. Jagoe had been working at a startup bakery managing finances and ordering, but the bakery had no tools for forecasting.

Jagoe had completed his undergraduate degree in mathematics, so he wrote a short-term forecasting model using linear algebra and improved it over time. By reducing waste and increasing sales, the model helped contribute $100,000 to the bottom line. The bakery was at $750,000 in revenue at the time. Says Jagoe, “This was a game changer. It was the difference between running in the red or in the black.”

For this project, Jagoe decided to redo that effort. Instead of using trial and error to come up with the model, he wanted to see whether a novice to intermediate user could do that in a shorter timeframe using SAS. He was able to use SAS Enterprise Guide to develop six models in just a few hours.

“That made the cost of purchasing SAS a no brainer,” explains Jagoe.

Jagoe’s proposal was accepted. He was not only invited to give a talk at SAS Global Forum, he also received a full scholarship to attend, and a student ambassadorship that granted him access to tremendous networking opportunities. Student ambassadors were given the opportunity to mingle at the opening and closing of the doors for various conference sessions, and during breaks they could hang out at the University of Alabama booth to talk to people who wanted to learn more about the University.

Early on in the program, David Black, Senior Director of Anti-Money Laundering and OFAC Analytics at US Bank, approached Cameron at the booth and started describing the department he ran and asking about Jagoe’s work, school, and SAS experience. Jagoe invited Black to attend his presentation.

After the presentation, Black asked Jagoe to email his resume to Nathan Banks, one of the managers who worked for him. In short order, he had a reply, an interview and a job offer.

And that offer was Jagoe’s dream job.

Jagoe is now an Anti-Money Laundering Modeling Analyst on the Advanced Analytics and Statistics team for Enterprise Financial Crimes Compliance at US Bank. The team does research and development for all of the programs that alert when someone launders money or does anything else that would violate US or international money laundering regulations.

“This opportunity put me on a career track I’d wanted for several years,” Jagoe notes. “If I hadn’t met Dave Black at the conference, I wouldn’t have this job. My presentation allowed me to demonstrate real skills that weren’t on my resume. And that helped me solve the old puzzle, ‘How do you get the job if you don’t already have the job?’” 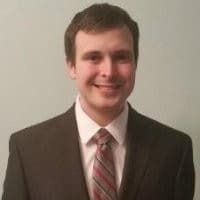 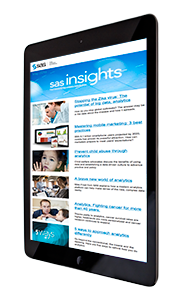