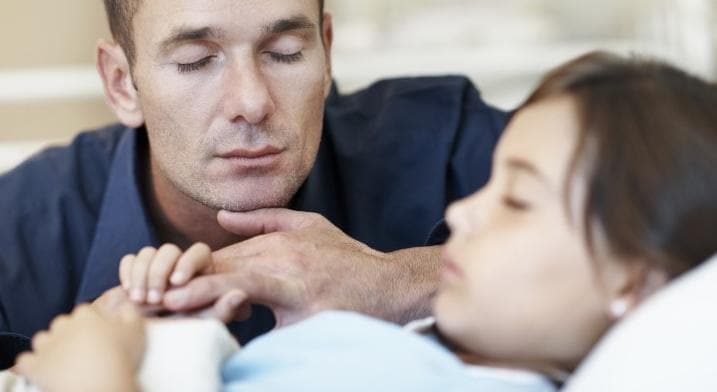 When it comes to sepsis, a patient’s condition can change from normal to lethal in a heartbeat.

It was a Saturday in November. Sally (not her real name) had recently given birth to a baby girl without complications. Around 11 p.m., as she convalesced in her hospital bed, Sally developed a mild fever and tachycardia – a high heart rate. Neither condition raised any concern. Both are common after a delivery. To her care team, Sally appeared perfectly healthy. Unbeknownst to anyone, the new mother was developing potentially deadly sepsis.

Sepsis is an inflammatory response to infection. The toxins from bacteria in the body release into the bloodstream to fight the threat, causing systemic inflammation that can slow blood flow and damage organs. If sepsis progresses to the later stages of septic shock, it can be life threatening.

Only 55 percent of U.S. adults have ever heard of sepsis. And yet, it’s the No. 1 cause of hospital readmissions and the leading cause of death in hospitals, according to Thomas Heymann, Executive Director of Sepsis Alliance.

See how data is shaping our world - for the better

Poverty. Health. Human rights. Education. The environment. Interested in making a difference? Join the Data for Good movement. Around the globe, people are banding together and using data to help solve some of the world's most challenging issues.

Heymann notes that 62 percent of people discharged with sepsis will be readmitted within a month. Every year, 1.6 million1 Americans are diagnosed with the condition, and of that number 258,0002 will die -- and hundreds of thousands of others will suffer ongoing physical or cognitive challenges.3

Early intervention: A matter of life or death

Rapid diagnosis and treatment are key to reducing sepsis complications, death rate and expense. “Early intervention is critical,” explains Heymann. “Mortality increases 8 percent for every hour treatment is delayed. If people suspect sepsis, it needs to be addressed as an urgent medical need. If sepsis is properly treated in a timely manner, we’ve seen that we can save up to 80 percent of the lives that we’re losing.”

As a result, Centers for Medicare and Medicaid Services (CMS) guidelines call for the patient to receive the full course of treatment during the 180 minutes after the first symptoms appear.

The challenge is that in the hectic environment of the emergency department, sepsis can be extremely difficult to spot. “Sepsis doesn’t manifest in a way that shouts emergency,” says Heymann. “The patient may look perfectly healthy. But appearances can be deceiving, and there are no simple tests. Predictive analytics is very exciting to us as a way to help busy doctors and nurses look past the surface to more quickly identify when a patient is going septic so they can prioritize their care.”

If sepsis is properly treated in a timely manner, we’ve seen that we can save up to 80 percent of the lives that we’re losing. Thomas Heymann Executive Director Sepsis Alliance

Luckily for Sally, the Dignity Health hospital where she delivered her daughter had implemented a Sepsis Bio-Surveillance Program through their big data platform, Dignity Health Insights. While her worsening condition remained subtle to her clinicians, a complex, automated, behind-the-scenes analysis of her vital signs and several other patient attributes triggered a “sepsis alert” – an indicator that Sally may be in peril.

A nurse spotted the alert in Sally’s electronic medical record and immediately contacted the intensivist on call. This physician performed additional tests and made the diagnosis of sepsis. By then, Sally’s blood pressure was dropping. The care team transferred her to the ICU and began administering the “sepsis bundle,” an evidence-based set of treatments. Thanks to timely and appropriate treatment, Sally recovered fully.

Dignity Health is the fifth-largest health system in the nation and the largest hospital provider in California. Part of the organization’s advanced analytics platform, the Sepsis Bio-Surveillance Program is designed to predict likely new sepsis cases at the earliest stages and instantly notify nurses and physicians so they can respond quickly enough to save lives. Today Dignity Health uses this solution to monitor 120,000 lives per month in 34 hospitals and manages 7,500 patients with potential sepsis per month.

Taking advantage of data from the electronic medical records of all patients in its facilities, the solution uses natural language processing and a rules engine to continually monitor factors that could indicate a sepsis infection. If these indicators reach a level where the probability of the patient’s having sepsis is high, the system sends an alarm to the primary nurse or physician.
Dignity Health validated and optimized its model to minimize the number of false positives by carefully tweaking the criteria thresholds and then measuring sensitivity, positive predictive value (PPV) and relative risk to achieve the right balance, as well as ensure that alerts fire at the right time.

Physicians who receive an alert are encouraged to respond using evidence-based practices that Dignity Health calls the sepsis bundle. This bundle includes procedures such as taking a blood culture, checking lactate levels, and administering appropriate antibiotics and fluids. The Sepsis App continually tracks the status of each treatment protocol in the sepsis bundle, as well as the time remaining until the end of the three-hour treatment window specified by CMS criteria.

“The trusted analytics and the well-defined notification system help to encourage adoption, which has the potential to save many more lives,” says Joseph Colorafi, MD, Vice President and Chief Medical Officer at Dignity Health. “We feel if we can get the sepsis bundle compliance rate to the 60 percent threshold, it would further decrease our mortality rates.”

The challenge is that physicians aren’t used to looking for patients with a high probability of risk for sepsis. “Whether they’re at a community health hospital, academic center or tertiary care center, they’re used to using past heuristics and reasoning for a diagnosis,” says Colorafi. “It’s incumbent on us in informatics to be credible and show them why these patients are different and then track them to provide a feedback loop (closed loop analytics) to demonstrate that a patient’s higher risk score is predictive of sepsis and therefore, mortality risk.”

Since implementing the new system, Dignity Health has seen a significant improvement in the mortality and ICU length of stay for its sepsis patients. At 28 of Dignity Health’s hospitals which have been on the program, sepsis mortality rates have dropped an average of 5 percent, according to Colorafi. Because patients spent less time in the ICU, the program delivered cost savings as well. In contrast, facilities that can’t support the current technology simply educated clinicians about sepsis treatment and showed no declines in mortality.

In the future, the health system plans to work on improving its operational efficiency in caring for patients after they’ve been resuscitated, using a ‘recovery bundle’ to reduce the overall length of stay. Dignity Health also plans to expand its predictive risk-scoring approach to reduce all-cause readmissions by giving patients the appropriate discharge protocols.

In the meantime, evidence continues to mount. Dignity Health’s experience shows that big data and predictive analytics give clinicians the timely insights and feedback they need to identify sepsis faster and thereby save lives.