“For 40 years, SAS has been helping customers change the world with analytics,” said SAS CEO Jim Goodnight. “As the leader in analytics, we continue to be the company people turn to for unrivaled expertise and solutions when it matters most.”

Financial services, government and insurance represent the highest proportion of SAS revenue by industry. Customers in these areas include Bank of America and HSBC, German insurer Munich Re and leading Irish retail bank permanent tsb, as well as many US government organizations including Delaware State Police and California’s Orange County Child Support Services. Industries with the greatest growth included banking, manufacturing, retail and services.

SAS is strengthening its offerings in the cloud, mobile and IoT spaces. SAS Cloud Analytics gained traction quickly and is now used by customers in more than 70 countries.

With 40 billion connected devices estimated to enter the market by 2020, the IoT will accelerate scientific breakthroughs, including advancements like smart cities, where experts position SAS as a major player. Yet, as opportunities for innovation increase with such connectivity, so do the risks of being attacked. In 2015, SAS introduced SAS Cybersecurity to help combat such risks.

Commitment to innovation is key to customer satisfaction

According to analysts, SAS has “predictive analytics solutions that offer almost every feature a data scientist or business user could ever want.” SAS’ commitment to innovation makes this possible. In 2015, the company reinvested 25 percent of total revenue into research and development – nearly double the percentage of annual revenue reinvested by most major technology companies.

“As SAS has grown, we have always reinvested a high percentage of revenue into R&D – this year a quarter of our total revenue – which allows us to stay at the cutting edge of analytics innovation and maintain a leadership position in our core markets,” said SAS Chief Marketing Officer Randy Guard.

Such innovation brought more than 1,800 new customers to SAS in 2015, now at 80,000 customer sites (including Lenovo and the Orlando Magic). This significant increase in new customers, along with a strong commitment to quality and service, contributed to SAS being named No. 1 for customer satisfaction, loyalty and purchase momentum by Temkin Group.

In 2015, SAS partners influenced 30 percent of new sales and nearly half of SAS’ largest deals, and the SAS channel is making a bigger impact than ever. Since welcoming global distributor Arrow Electronics, SAS has signed more than 150 resellers. In 2015, SAS signed its first OEM agreement with Toshiba Global Commerce Solutions and signed its first managed analytic services providers (MASPs) to further help customers implement SAS technology in ways that best fit their individual needs and those of their own end users.

SAS will continue to thrive in 2016

Analysts named SAS a leader in agile BI, and IDC[1] noted in a recent report that SAS held a 33.3 percent share of the advanced and predictive analytics market. That share was greater than the 24.5 percent market share of all the other nine named competitors combined. SAS has also been recognized by industry analysts as a leader in data management, fraud detection, retail, customer intelligence, BI and analytics segments.

SAS provides analytics training via SAS Analytics U and in partnership with universities and high schools. One of the many ways SAS is addressing the analytics skills gap, SAS Analytics U saw tremendous growth in its free offerings. Downloads of SAS University Edition and SAS OnDemand both grew in popularity, with more than 520,000 combined downloads and registrations. More than 45,000 people registered for free e-learning courses. 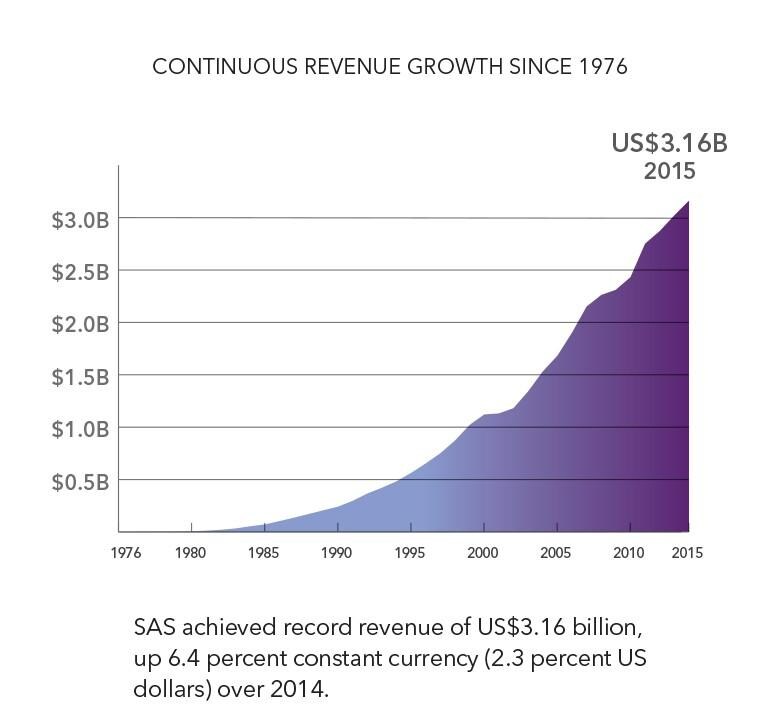